Design is never finished, never complete. Every design project is an iteration on a much greater process that has been unfolding since our ancestors first learned to use tools. Every design strategy is the culmination of that historical process, from which all creative disciplines emerge. But this endowment of creative knowledge resists easy classification. Its boundaries are porous, and perpetually being extended further outward. Each iteration adds something to that greater whole. Every iteration is the opportunity to ask a new question.

Design as a mode of inquiry has become increasingly salient within academia in recent years. And yet, design is a domain of the generalist, still fitting somewhat uncomfortably across a panoply of specialized disciplines; disciplines as diverse as entrepreneurship, anthropology, engineering, and art, among many others. There is still the live question of how to value this kind of creative knowledge, as well as the question of how to most effectively teach it, whatever “it” may be.

Design Thinking is by far the most prevalent of these creative strategies. And yet, too often design is taken to be coterminous with Design Thinking, and Design Thinking is often reduced to a mere method… a set of neat, linear steps that produces “innovative” outcomes. But creative process is often messier than these design pedagogies imply. Every project and every context demands its own refinements and adaptations of process. For this reason, design education must evolve beyond Design Thinking. How might we engage design students across a variety of creative strategies, including but not limited to Design Thinking? How might we help them navigate these various design processes, so that ultimately, they might be able to create their own?

The development of design as a discipline is iterative and ongoing. The following is an incomplete taxonomy of interrelated design strategies, which might help us advance the process further, and set the foundation for the next iteration to emerge.

Design Thinking emerged in the 80’s and 90’s from the classrooms and studios of Stanford and IDEO, and gained considerable popularity in the early years of the 21st century. In its most simple formulation, it might characterized as the scientific method applied to the creative process. It is human centered and iterative. This process moves from the abstract to the concrete through iterative prototyping, from low resolution to high resolution. Design Thinking is often presented as five steps: 1. Empathize, 2. Define the problem, 3. Ideate, 4. Prototype, 5. Test.

Participatory Design has its roots in the Scandinavian trade unions of the 60’s and 70’s. Participatory Design is the aunt or uncle of of Human Centered Design in the sense that it is an approach to design process that attempts to engage all stakeholders. There is an explicit political dimension to Participatory Design. It aspires to democratize the design process, blurring the distinction between the designer (or engineer) as expert and the user as expert. Participatory Design attempts to coordinate the experiences and insights of all stakeholders in order to develop outcomes that benefit everyone. Early on, these principles were manifested in the design of public infrastructure and the built environment, but have since become grounding principles in the development of open source culture, and Internet culture more generally.

Critical Design emerged from the work of Anthony Dunne and Fiona Raby in the late 90’s. In their book "Speculative Everything", Dunne and Raby set up an opposing dialectic between two types of design: critical design and affirmative design. This chart organizes these oppositions into two lists:

Affirmative design is problem solving, with design framed as a process that provides answers in the service of industry for how the world is.

Critical design, on the other side of the page, is characterized as problem finding, with design framed as a medium that asks questions in the service of society for how the world could be.

Critical Design has its antecedents in Critical Theory, which emerged from the Marxist critiques of the Frankfurt School in the 1930s. This cultural critique takes the form of a dialectical negation against capitalism, expressing the commodification of art, design, and culture as a problem, in part, because it obscures an awareness of class consciousness. Critical Design is a creative strategy that establishes design as a medium for making visible that which is usually obscured in our daily interactions with the quotidian objects of our material culture, including the relationship between the object and the labor that went into its creation (i.e. commodity fetishism). Critical Design creates affordances for awareness, framing how we understand, question, and critique the society and culture around us?

Discursive Design is closely related, if not synonymous with Critical Design. The term implies that the function of the object - what it does - is secondary to how it makes us think about the context in which it exists. The object is the site of discourse. These kinds of objects tend to be prototypes, resisting commodification and mass production. They often shock the viewer into a new awareness of the social context from which they emerge.

- “What is Discursive Design”
- “The Four Fields of Industrial Design”

Speculative Design is another sibling to Critical Design and Discursive Design. However, Speculative Design is explicitly oriented towards future scenarios. User scenarios are an important method found in many of these design strategies. These kinds of scenarios allow us to imagine things not as they are, but as they might be. They allow us to ask questions. What does the object do? For whom? Where does it do it? When? How does the object do it? And why? 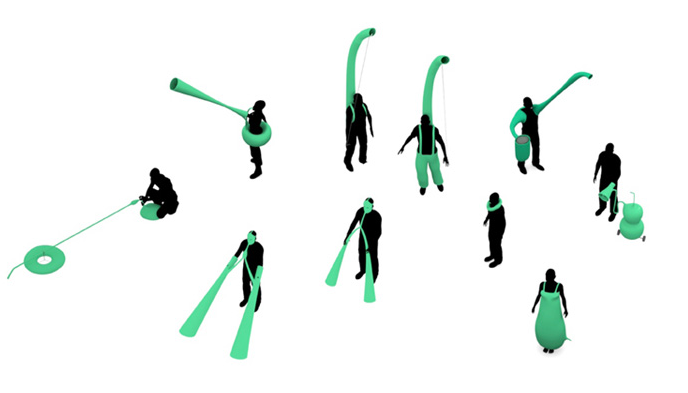 Science allows us to make predictions. Fiction allows us to speculate. Throughout much of the late 20th century and early 21st century, Science Fiction has given us a glimpse of a future that did not yet exist. Design Fiction draws on the power of storytelling for making speculations concrete. In this way, the prototype works in much the same way a prop in a movie might (i.e. diegetic prototype), creating affordances for the behavior of the characters in the story, and responding to the context of which they are a part.

- “Design Fiction A short essay on design, science, fact and fiction” by Julian Bleeker
- The Near Future Laboratory
- The Extrapolation Factory

- "An Introduction to Positive Sum Design"
- “Nonzero: The Logic of Human Destiny” by Robert Wright
- The Better Angels of Our Nature: Why Violence Has Declined by Steven Pinker